Thousands of smartphone users are disturbed by the problem of fast phone battery draining. In such a case, they are not shy about adopting all the left tricks to increase battery life. If you are also facing this issue, then you need to take a look at your suite of apps. In fact, pCloud experts have compiled a list of some of the apps that require longer battery life, or simply those apps that consume your phone’s battery power the most.

There are many reasons why the app is a battery killer. Not having a dark mode option or only turning on complex background features can reduce the app’s efficiency. Location-based apps are, of course, more demanding – but at the top of the list are some that might surprise you.

These two applications are in the foreground
Fitbit tops the list. You’ll be surprised to know that the Fitbit app, which Google bought in 2021, works 14 of its 16 features even when the app is not in use. Even worse, the Fitbit app turns on “Camera, Location, Microphone, WiFi” all the time. The Verizon app scored comparatively in the pCloud study of the biggest battery drainers. Both apps scored highly in the study – 92.31%.

ALSO READ – BEWARE: FIRE is being seen in this smartwatch tracker, many lifelong users have been infected; Case registered 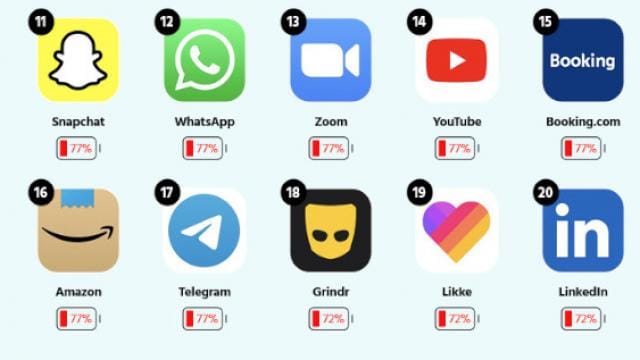 Social media apps are also advanced in battery sucking
The usage of social media and communication apps becomes very high, which drains the battery. Among the 20 most battery killing apps, there are 6 social media apps. On average, Facebook, Instagram, Snapchat, YouTube, WhatsApp and LinkedIn allow 11 additional features to run in the background, such as photos, WiFi, location, and microphone. All of this requires more power to run and eventually drains your phone battery quickly. Additionally, out of these six social media apps, only Instagram allows dark mode, which can save up to 30% battery life on the phone. The only other social media app that allows this feature is Twitter – which probably explains why it doesn’t have the top 20.

11 Features of Dating Apps Running in the Background
The study found that online dating drains your phone battery as much as it drains your emotions. Online dating apps like Tinder, Bumble, and Grinder make up 15% of the top killer apps, with an average of 11 features running in the background. Dark mode is not available on all three dating apps and therefore requires more power while using it, which drains your battery quickly.

You can analyze your battery usage to see which apps you can scrape from your device. Under the Settings app, tap on the Battery tab to select the apps that aren’t worth your time.